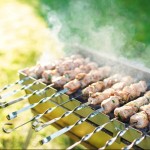 Probably, many watched this good movie – “When Harry Met Sally”. And they certainly remembered the scene in the cafe when Meg Ryan imitated an orgasm shocking all the visitors, including Billy Crystal.

If you haven’t watched it, go watch the entire movie. For those who watched, just remember the scene. (Make the sound quieter, well, or louder if you want to tease the neighbors)

We will not discuss the film itself, after all, the site is a culinary one.

What did they serve the main characters of the film in this cafe? By the way, this cafe really exists.

This is a famous place for all New Yorkers – Katz’s Delicatessen (or as they call it in their own way – Katz’s Deli). And the most interesting thing is that these sandwiches are still on the menu.

I will not pull any further, the heroine Meg Ryan ate – Sandwich with turkey

Make a few punctures in the breast (but not through), sprinkle it with dry spices, grate. Let it soak for 20 minutes and then put the breast in a container, pour in soy sauce and vegetable oil. Thoroughly coat the breast with this mixture, cover and put in the refrigerator for 2-3 hours

We’ll get it in 2-3 hours. We shift the breast onto double foil, pour the sauce remaining in the container there, close the foil well so that the juice does not flow out during cooking.

Preheat the oven to 220 degrees C (bottom-top mode) and put the envelope with the breast there. On average, it takes 40-50 minutes to prepare.

As the breast is cooked, we begin to serve sandwiches.

Lubricate the bottom bread with Russian sauce, put the chopped turkey, lettuce on top and another bread smeared with the same Russian sauce on top.

In this cafe, the turkey is put from the heart, so 700 grams of fillet is just for 2 sandwiches.

With pastrami, it’s not possible to cook a sandwich so quickly. Only the preparation of pastrami itself will take up to 2 weeks.

Pastrami, pastroma (the name is consonant with basturma) is a dish of Jewish cuisine originally from Bessarabia. Widespread in the USA. Initially, poultry meat was taken to prepare the dish – duck, goose. Now it’s made with beef.

The pastrami that Billy Crystal’s character eats in the movie takes 2 to 4 weeks to cook.

The set of spices is kept secret. Just like a set of wood chips for a smokehouse. The cooking process itself looks like this:

The brisket is coated with a set of spices and placed in a smokehouse for a period of 2 to 4 weeks. Then it is taken out and placed in boiling water until a certain temperature is reached.

Before serving, pastrami is placed in special double boilers for 10-15 minutes.

There are faster recipes (since not everyone has such smokers) in which the meat is first marinated for 5-8 days. But these are already other stories, and we will definitely post the pastrami recipe.

And don’t forget to watch this wonderful movie.

Bakery Desserts In the kitchen

Coulant. A simple and quick recipe for a chocolate dessert

How to boil eggs. Lightly boiled, soft-boiled and hard-boiled

Fried potatoes. This is how michelin chefs cook it